Over 2 million refills and counting!

Two old-style drinking fountains were replaced with new water refill stations in September 2011, shortly after the publication of the Assessment. And in September 2014, we installed a third Refill-it station in the newly renovated Lower Level. Each station features:

Anyone who has tried to refill a water bottle at a typical water fountain knows how awkward - and messy - it can be. The water refill stations make it fast and easy to refill almost any water bottle, and they obviously work: on average, each refill station is used hundreds of times every day!

Since they were installed, the stations have been used more than 2 million times.

Of course, that doesn't mean that 2 million plastic bottles have been taken out of the waste stream... but it's pretty obvious that providing water refill stations does encourage people to use their own bottles. 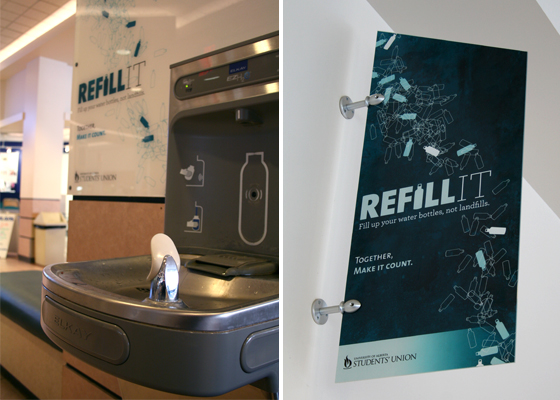 As of July 2019, we estimate that the three stations have been used 2,081,778 times (please see note below regarding this estimate).

If you have any questions about the Refill-it stations, please contact marketing@su.ualberta.ca.

Note: Just in case you are looking at the counters on the water stations, note that the two on the main floor units have both failed at different times. In fact, the unit closest to the east doors of SUB was out of service for about 90 days when when it froze up on a really cold winter's day! As a result, while the counts at the machines are no longer accurate, our estimates are reasonably precise, since they are based on earlier usage recorded from the beginning.